On the flight from Michigan to Minneapolis last week, I came across an article in Delta Sky magazine which described how corporations such as Chick-fil-A, Cargill, and Cold Stone Creamery are using simulations to train their employees. For example, Cold Stone Creamery uses a game-based simulation in which employees get points based on their ability to serve the right portion size and the speed with which they serve customers. Simulators are also used extensively in safety-critical domains such as medicine, military, aviation, space, and nuclear power to train key skills to operators.

Ever wondered what the fidelity of a simulator should be? In very simple terms, fidelity refers to the extent to which a simulation mimics the real world. Fidelity includes equipment, audio-visual, physical, motion, and cognitive fidelity. 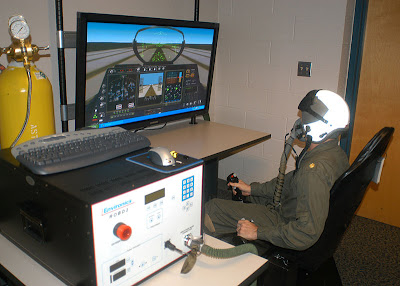 The following line of research would imply that higher the simulation fidelity, the better the transfer.


Contradicting the above line of research, there is also evidence that suggest that a simulator does not have to replicate the real world in it’s entirely. That is, as long as the training and transfer environment share the same cognitive processing strategies and goals, skill transfer will occur. In fact, if all training was indeed context-specific, will we be able to apply anything that we learn in everyday life?

The following steps will help guide the design of a simulator.